Our goal for funding the Peloquin sign has been met! However you can still use this form to help the Trust with additional development on the Peloquin property, such as bridges and boardwalks to extend the trail. Any excess funds will be applied to HALT’s general conservation efforts. 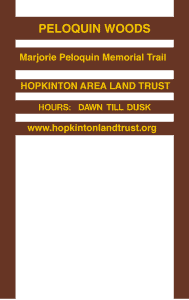 A 30-acre parcel off Front Street in Hopkinton known as Peloquin Estates had been in the Peloquin family since at least the early 20th century. Marjorie Peloquin, wife of Henry Verne Peloquin, was given the land in 1959 and lived there until she passed away in 2009. The executor of Peloquin Estates then sold the property to a developer, who subdivided it and built a short street named Cobblers Way.

A number of neighbors and other Hopkinton Residents petitioned the town to keep “Peloquin” in the street name, or to use another name that would preserve the memory of the Peloquin family. The petition failed, but now more than half of the original property, about 16 acres, has been deeded to HALT, to be preserved forever as open space.

In recognition of the family that protected this land for many decades, HALT has named the area Peloquin Woods, and we named the trail through it the Marjorie Peloquin Memorial Trail. We want to erect a sign in recognition of this, similar to the HALT trailhead signs you see on our other trails in town. These high-quality signs are expensive and in order to afford this, we are looking for donations. Whether or not you are a current member of HALT, you can contribute to this project using the form below.

You can contribute any amount, but a minimum donation of $30 or more will also make you a member of HALT. All proceeds contributed through this form will be applied to the sign, and, as a 501(c)(3) charitable organization, donations to HALT are tax-deductible.