Mary Pratt, one of the founders of HALT and director for many years, passed away on Dec. 2. The following article about her life and accomplishments was published in the December 11 issue of the Hopkinton Independent, reprinted by permission. Also see Dave Goldman’s tribute. 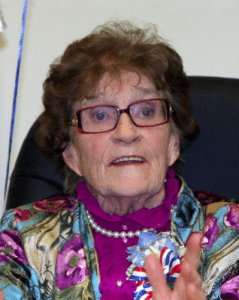 Maybe sometimes Mary Pratt acted like the smartest person in the room.

And maybe many times she was.

“Mary was absolutely brilliant,” Select Board chair Brendan Tedstone said. “She was absolutely a genius. If you gave her a project, she would drive into Boston four days a week to research at the State House or wherever she had to go. She was absolutely relentless. She used her massive intelligence and drive to do her job as a selectman about as tenaciously as anyone I’ve ever met in my life. She took it very, very serious.”

Pratt, a longtime volunteer and advocate for the town, passed away Dec. 2 at the age of 91. She had been living at the Mary Ann Morse Healthcare Center’s assisted living facility in Natick, where she moved shortly after selling about 32 acres of her family’s Fruit Street property to the town in 2015 to be used for agriculture, wells, open space and Scouting programs.

Tedstone grew up in town and was friends with two of Pratt’s children (Tom and Martha). He spent many winter days skating on the pond at Pratt Farm. And as he grew older he developed a new appreciation for Pratt, who was heavily involved in town issues well before she was elected to the Select Board.

Coincidentally, Tedstone was a nurse at Mary Ann Morse when Pratt moved into the facility, and he helped with her care for most of her time there. When Tedstone decided to run for the Select Board, Pratt offered her support.

“When she first came to the rehab I told her I was running for selectman, and she voted for me with an absentee ballot,” Tedstone recalled. “She sent that in probably the day that you were allowed to. So she was my first vote as selectman.”

Born in Natick, Pratt was the daughter of the late Joseph and Mary (Devitt) O’Brien. She received her bachelor’s degree from Regis College and followed that with a master’s from Wellesley College, both in chemistry. In her early adult years she did radioisotope medical research.

She began her involvement in town government in the early 1960s, working on education issues. Before special education programs were introduced, Pratt educated herself with graduate classes to find out what could be done in the public schools to meet the needs of those students who needed extra support. She was an advocate for special education as well as for programs for exceptionally gifted students. She worked successfully to get kindergarten into the regular curriculum in Hopkinton.

In addition to serving on the Select Board, Pratt held a number of other elected and appointed positions, contributing her time to the Metropolitan Area Planning Council, Southwest Area Planning Committee, Organization for Balanced Fiscal Future, Fire Station Building Committee, Hopkinton Housing Partnership and Open Space Committee, among others. A founder and longtime member of the board of the Hopkinton Area Land Trust (HALT), Pratt had many accomplishments, including the reconstruction work at the Whitehall Dam and the purchase and stewardship of the Lake Maspenock Dam.

When Pratt stepped down from the HALT board a few years ago due to health reasons, then-director David Goldman lauded her for her contributions, writing: “Her energies were always directed toward the preservation of the town’s rural character, the open spaces and environmental education. Mary was passionate about preserving the trees, saying that they were the ‘lungs of the community.’ … To say Mary has been a dedicated public servant and a passionate conservationist seems an embarrassing understatement.”

In 2012 she was honored by the town for her five decades of public service.

“Mrs. Pratt loved Hopkinton,” said Select Board member Brian Herr, who served alongside Pratt during his previous stint on the board. “She was a dedicated leader in our community and great fun to work with on the Select Board. Occasionally she would slip me a funny note while others on the board were deliberating a more serious issue. The Town of Hopkinton is a wonderful place to live and raise a family in large part because of Mary Pratt and her endless energy. I miss her!”

The wife of the late Joseph William Pratt, she is survived by her children, Daniel Pratt and his wife, Kelly, of Harrison City, Pennsylvania, Maryanne Bilodeau and her husband, Thomas, of Westborough, Thomas Pratt and Susan Bush of Hopkinton, Robert Pratt and his wife, Jennifer, of Hopkinton, and Martha Pratt-Rice (and her late husband, Joel Rice) of Warwick. She also leaves behind her sister, Joanne O’Brien of Natick, as well as 11 grandchildren, five great-grandchildren and many nieces and nephews. She is predeceased by two sisters, Patricia Haswell and Marjorie Laprise, and a son, Joseph Pratt, who passed away Nov. 13.

A funeral mass was celebrated Dec. 5 at St. Matthew’s Parish in Southborough, followed by burial in St. Patrick’s Cemetery in Natick. In lieu of flowers, donations may be made to St. Jude Children’s Research Hospital (stjude.org).

Material from Mary Pratt’s obituary from Chesmore Funeral Home in Hopkinton was used in this report.